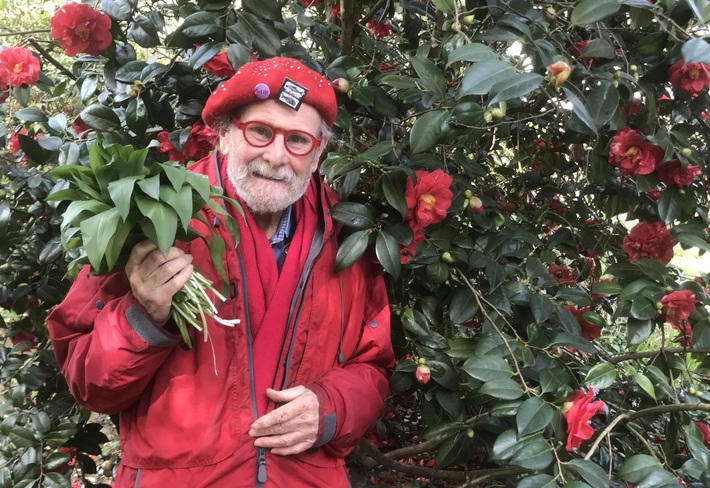 Roger Phillips, and his wife, Nicky Foy, have lived and worked in Eccleston Square, since 1974, so his connection with square dates back almost 50 years. In 1981 he was asked to become the honorary garden manager of Eccleston Square Garden and from that time he stewarded and oversaw its development, transforming it from the neglected patch of ‘urban desert’(his words) it had become after the war, into the wonderful, award-winning, fertile micro-climate garden it is today. Over the years, apart from being a board member, he was a trustee of the garden, successfully fighting off an attempt by developers to buy the garden freehold and build an underground car park beneath it. From the moment he agreed to take on the management of the garden, it was he who oversaw all the gardening and planting. He preserved the 1830s Cubitt design but created new ways of enjoying the garden by making paths through the original beds and by extensive imaginative and unusual planting throughout the garden so there were plants, colours and smells to enjoy all year round, both from inside the garden and for passers-by.

The Great Storm of October 1987 initially seemed like a disaster, because it resulted in the loss of numerous 100-year-old plane trees, among others, but Roger saw this as a fantastic opportunity to introduce all kinds of new plants and develop Eccleston Square into the botanical wonder that it is today.

Roger’s talents have drawn him in many different directions: from his interest in fungi with his book Mushrooms and Other Fungi of Great Britain and Europe (1981), to a series of botanical identification guides, including Wild Flowers of Britain (1977), Trees of Britain (1978), Wild Food (1983) and Herbs and Medicinal Plants (1987), into collaborating with Martyn Rix on Roses (1988), Shrubs (1989), Bulbs (1989), Perennials (1991), Annuals (1999), among many others, which became key reference books among the cognoscenti of the gardening and horticultural worlds.

Gardens occupied much of Roger’s attention in the 1990s and 2000s. His knowledge of the world’s gardens, both famous and obscure, was revealed in A Photographic Garden History (1995), written with his wife Nicky Foy, and in the two volumes of The Botanical Garden (2002), written with Martyn Rix. He generously gave his time to both amateurs and professionals who sought his advice on plants and fungi, including the Prince of Wales whom he visited at Balmoral to identify and discuss the mushrooms on the estate, and was then asked to lunch with the Queen and the Queen Mother in the summer house! But he was just as happy in less grand settings, and he regularly led mushroom-collecting walks, talks and other foraging expeditions for interested professional and amateurs. Building upon the popularity of Wild Food (1983), of which a revised edition appeared in 2014, he produced The Worldwide Forager in 2020.

What made Roger a very familiar name in the British gardening world, with visitors coming to Eccleston Square Garden open days hoping to meet him, were his two television series: the BBC series The Quest for the Rose (1993), where he documented the trail of one of his favourite flowers through both geography and time; and the subsequent series The 3,000 Mile Garden, based on letters between Roger and the American cookery writer and gardener Leslie Land, (1995) in which Eccleston Square Garden was featured when Roger demonstrated how to slow-cook a ham in compost.

The garden has been awarded numerous prizes over the years and they are exhibited in the garden conservatory. These, together with the collection of 124 camellias, a National Collection of over 60 different ceanothus, an extensive collection of 150 roses, including climbing roses, tea roses (too tender to be found commonly in British gardens), shrub roses and ramblers, are a testimony to Roger’s dedication and passion to Eccleston Square Garden, for 40 years. In 2018, a Belgian Rose breeder dedicated a rose to Roger and his collaborator Martyn, called the Phillips and Rix rose, and there are a number of these roses in the garden

In addition to his numerous achievements, Roger brought an infectious enthusiasm and joy in his work to all his endeavours. His characteristic red beret and glasses heralded his almost daily visits in and around the Square Gardens, where he was met with great fondness by residents and locals who could spot him from miles off, and who would often stop to ask him about a plant that they had seen in the garden. He was always happy to share his encyclopaedic knowledge with anyone who was interested in plants and he will be remembered with deep affection.